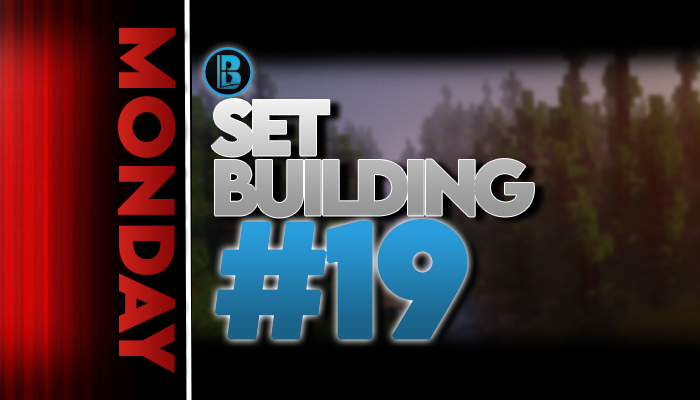 On The Topic Of Set Building

Hello and welcome to this issue of the #BlogMonday series! Today I will be talking about Set Building, namely in minecraft machinimas! You can check out last week’s blog here, where we discussed whether Machinima Creators are ‘Filmmakers’!

WHAT IS SET BUILDING?

Today I wanted to focus more on an area of machinima making that is often overlooked… Namely ‘set building’, specifically in minecraft machinima. I’ve had a number of different experiences on the construction of sets for a few different production studios in the past, and I think it’s such a fascinating part of the entire process of creating a machinima within Minecraft.

‘Set building‘ typically refers to the building of the sets and locations where machinimas are later filmed. This ranges from small production sets to huge and large-scale cities built entirely for filming. The scale often depends on the production’s budget, team size, and length of project (such as machinima shows and series having larger sets than machinima films).

I had the absolute one of a lifetime opportunity to work on a project of the scale of The Game: Rebooted for Tossler last year. It was amazing to be able to work on every set for the machinima and bring his visions to life. You can watch the machinima on Baker+ here.

The set consisted of a large section of a suburban town, encompassed by large scrap walls and a spruce forest. It has a very dystopian feel as the machinima is set in a fallen apart world and forced the characters to retreat to a fort-like building for safety. It was an amazing experience to have worked on such an amazing and large-scale project, and definitely took me a few hours of work.

Set building is a very important aspect of minecraft machinima, as it is the first thing that brings your vision to life. It’s the first time that you, as the director, get to see what you will be working with and start imagining everything in your head very vividly. And let’s be honest – it’s super exciting.

Having a few years of experience now, I think I’ve learned that the most important thing you need to think about when building sets it being critical and sticking exactly to what the director asked for. Sets often have to be very specific to what is written in their script, and changing one detail can make it very difficult for the client to film later on. For example, the Shopping Mall Tossler asked for required a huge front window made of glass at the front, as well as an underground car park, which were features pointed out directly by the director.

TSCStudio is very well-known for their amazing large-scale world-building. Being the large medieval universe that it is, it requires a much larger number of sets, so Braigar and his team set off to construct the entire world of Royna a few years ago. Having been in the world myself multiple times, it never ceases to amaze me how much work has been put into the building of TSC’s sets.

The biggest difference between TSC and other production studios is that whilst most machinimas are filmed on small sets dedicated to the scenes that take place within the film, TSC has the entire world of Royna, including every path, block, and forest in between each set. It is truly massive.

TSCStudio also utilises a medieval resource pack, which further enchances the experience of being on a custom set. As a builder, I very much respect their team’s amount of hours and dedication put into a voluntary project, and it deserves to be mentioned.

Set building already takes many hours and work, but world-building is another undertaking in itself. It is often underestimated how long building in minecraft takes, especially at the quality that machinimas have evolved to, with studios such as TSC having raised the bar on multiple occasions. An amazing advantage to building the entire world is that you can visualise it completely and really feel like your literature is real. The world of Royna feels real, because it follows realistic geographical rules, it has towns and cities which feel like real medieval places, and we can see a real map of the world before our eyes; this is not something you can achieve with film sets alone.

Although not actually a machinima set, I also had the absolute honour to build the set for the Crafty’s Awards show this summer! The Crafty’s were a fun awards show rewarding content creators and minecraft players for their achievements over the last several years, organised by popular names such as Argon, Hype Events, and Magic!

This was by far one of my biggest undertakings as a builder. The main set was huge… Much bigger than anything else I had ever worked on. Not only was the main stage building a large and very detailed build, but the entire surrounding area was filled with carnivals, small minigames, plants, and more decorations. Then, the entire build was encompassed by beautiful wooden walls, with an extensive spruce forest on the outside. I personally love it!

Argon has been actively reaching out to me with build commissions for his events for the last three times, and we are currently working on our fourth project together. I couldn’t be more thankful for the opportunity he has provided for me and how far he has pulled me into the community. My name had grown so much since I started working with him, and it was both a great experience and an amazing thing to put on my portfolio. In the past, we have also worked on McProm and PrideCTF together, both for which I was the main builder.

Set building is truly a very important area of minecraft machinima and is often overlooked when creating and watching. Remember to always respect the amount of hours builders put into constructing the very scenes that your favourite characters are in! It would be greatly appreciated if you could also check out my Building Portfolio. Thank you for reading!