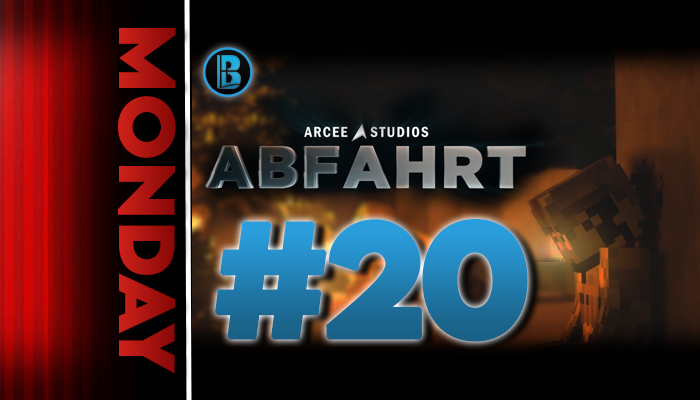 Hello and welcome to this issue of the #BlogMonday series! Today we will be announcing the upcoming Baker+ Original ‘ABFAHRT’ by Arcee Studios! You can check out last week’s blog here, where we talk about set-building in Minecraft machinimas.

For months now, we have been teasing at a Baker+ Original Minecraft Machinima ‘ABFAHRT‘, and it is almost finally here! The movie, made by Arcee Studios and directed by Louis, will be arriving to your screens on September 17th.

ABFAHRT tells the story of a German Elite Unit called ‘The Stammtisch’, who are – let’s call it – pretty cursed. Often referred to as clowns, the mission they’ve been charged with is to infiltrate the enemy base and collect as much information as possible. Sounds easy right? Maybe for a regular special unit… The Stammtisch Unit is not necessarily a very conventional one. They cause a lot of trouble, appear as if they’re dressed like animals, and definitely do not look like they would be able to go to war.

“Viktoria. As cute as the child of the regulars seems, as deadly she is! An absolute killing machine, hidden behind a cute facade. Meet Viktoria in ABFAHRT and witness her destructive power.”

Arcee Studios is hosting a Premiere on their Discord Server this Friday at 9pm CEST! Everyone is invited to watch the machinima as it releases on YouTube, simply by following discord.gg/stammtisch! After the Official Premiere, ABFAHRT will be available for streaming on Baker+.

You can also read up on ABFAHRT in our past blog post:
– ‘ABFAHRT’ – Coming This Month to Baker+

“He is the brother of the COMMANDER and the right hand of the Stammtisch. Marvin is afraid of everything and is the group’s scaredy-cat.

Will Marvin be able to overcome his fear? Find out on Friday, when ABFAHRT airs on Baker+.”

We will be posting daily character teasers similar to the ones above on our Discord Server. Make sure to join us to keep in touch with the most recent news! There will also be a final trailer dropping some time this week before the film release, but we haven’t been told when! Guess it will be a surprise.